Positive price movement during bear markets are notoriously hard to come by due to the non-stop FUD of media and lackadaisical interest from crypto investors. 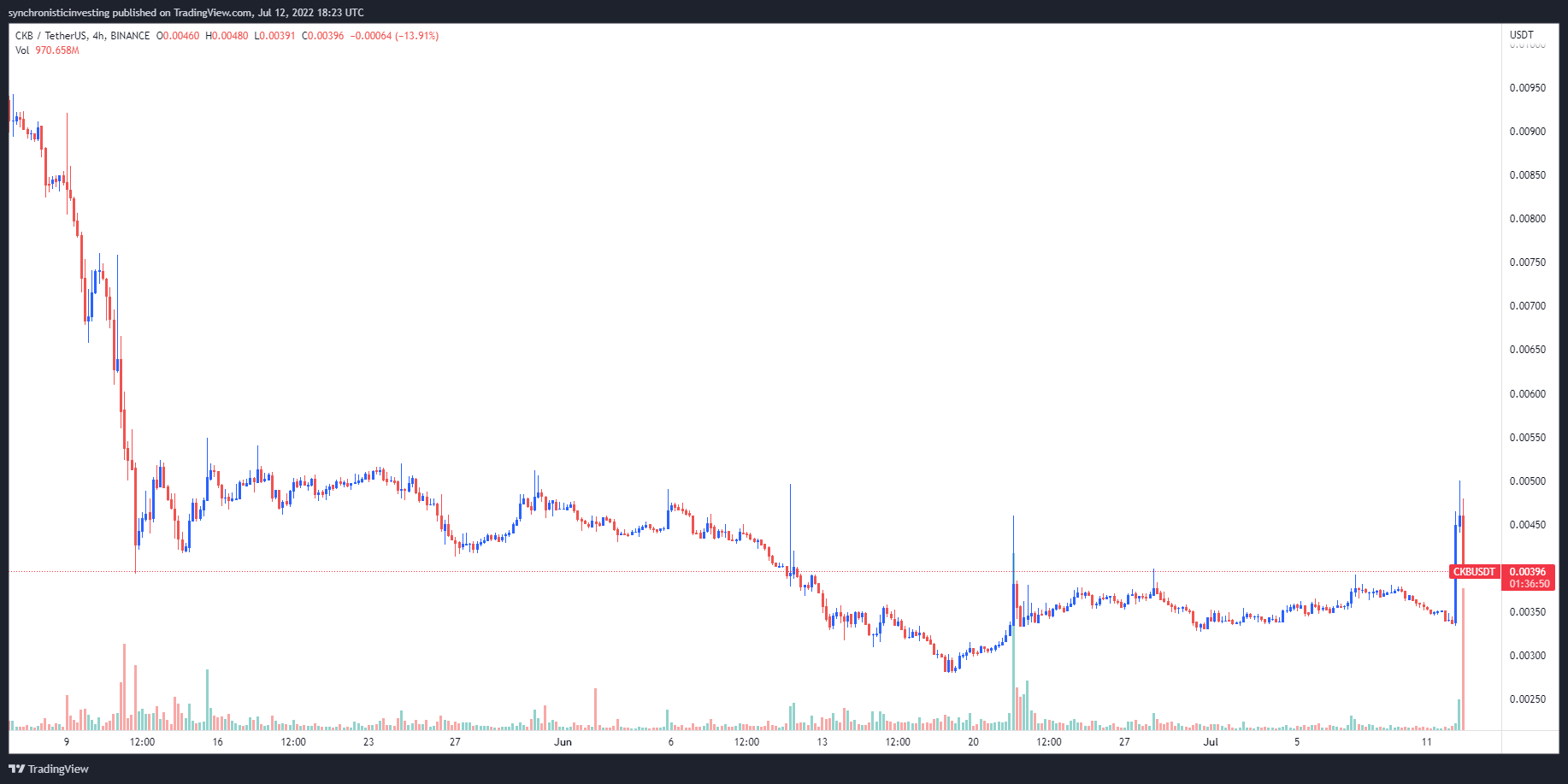 Three reasons for the positive gains for Nervos Network include the launch of the network’s layer-two (L2) solution Godwoken, the integration of the Celer c-bridge within the Godwoken protocol and the launch of a new nonfungible token (NFT) marketplace on the Nervos mainnet.

The recent price rally for CKB was ignited on June 29 when the protocol announced that its L2 solution “Godwoken” had officially launched on the Nervos Network mainnet.

According to the announcement, Godwoken is an Ethereum (ETH) Virtual Machine (EVM) compatible Optimistic rollup that allows projects building across the various sectors of the market to easily create and port their dApps to the Nervos Network.

The addition of EVM compatibility also makes it possible for any project launched on Godwoken to be instantly interoperable with other EVM chains, which can help increase their reach and grow their user-base.

Prior to the spike in CKB price, the developers announced that Godwoken had been integrated with the Celer cBridge to enable the bridging of certain assets between Nervos and the Ethereum network.

Excited to announce that we’ve completed integrations and now support bridging on @NervosNetwork’s #Godwoken!
⛓️⛓️You are now able to bridge $USDT, $USDC, $ETH, $WBTC, and $DAI between @ethereum and #Godwoken in a fast, secure, and low-cost fashion!https://t.co/swiAJ2WZLa

According to the announcement from Celer, the first assets available to bridge between Godwoken and Ethereum are Tether (USDT), USD Coin (USDC), Ether, Wrapped Bitcoin (WBTC), and DAI.

The main selling point for the use of Godwoken is that it “enables developers to employ Ethereum contracts while keeping transactions scalable, fast and low-cost.”

Related: US trademark and copyright offices to study IP impact of NFTs

Anothe development that has brought added attention to the Nervos Network was the launch of the Oblivion NFT marketplace on the protocol’s mainnet.

Note: there are a few “test” NFTs. No need to purchase these, they offer no utility, and were simply created to demonstrate/test functionality.

Despite a collapse in the prices of NFTs, nonfungible tokens remain a popular buzzword and there is still a lot interest in increasing the adoption of blockchain and NFT technology by traditional business and finance.

In addition to the launch of its first NFT marketplace, Nervos and its L2 solution Godwoken have also welcomed several new decentralized finance platforms including YokaiSwap, which deployed on Godwoken v1, and a cross-chain protocol called JioSwap.

The views and opinions expressed here are solely those of the author and do not necessarily reflect the views of Cointelegraph.com. Every investment and trading move involves risk, you should conduct your own research when making a decision.

Tron Could Be Ready For $0.1 After Hard Fight, Here Is Why?

Genesis Creditor Groups’ Loans Amount to $1.8B and Counting: Sources

Binance Banned in the U.K.